BLOG: The UK’s Outrage Against The ‘Fatima’ Advert 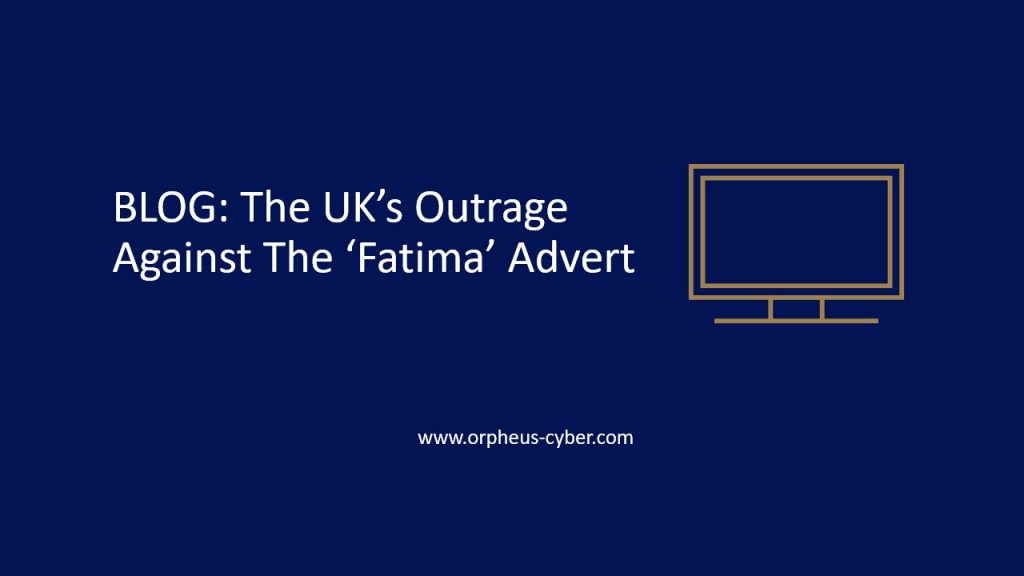 In this blog post, we discuss the recent controversial government ballet advert.

The release of this advert evoked a large amount of outrage amongst the public. The picture depicts a young dancer tying her ballet shoes, alongside the words: ‘Fatima’s next job could be in cyber. (She just doesn’t know it yet)’.

CyberFirst, the government programme behind the ad, provides opportunities to help young people aged 11 to 17 explore the careers of tech and cybersecurity. The adverts themselves used a series of personal stories to show how currently employed members of the workforce could retrain and reskill into a new industry. At the bottom of the advert it states the words: “Rethink. Reskill. Reboot.”

However, this particular advert image of ‘Fatima’ sent the internet into a frenzy, it sparked a lot of online outrage and conflict with the idea of whether this was the correct message to release to the public. Countless artists and creatives across the UK expressed their disdain and outrage in light of the campaign, they felt this image showed a general lack of respect shown to the arts industry by the government. Many accused the government of not sufficiently supporting the creative industries throughout the pandemic and believe that the advert was used as a suggestion and almost coercion that young people should “rethink” careers in the arts and creative industries.

The outrage lead to the advert being removed completely from the series and from the CyberFirst/UK Government website but many feel that this was an indicator of how the government genuinely views long-term careers within the performing arts sector.

Boris Johnson’s official spokesperson told the Independent that the long-running campaign has been pulled. They said: “This is part of a campaign encouraging people from all walks of life to think about a career in cybersecurity but this particular piece of content was not appropriate and has been removed from the campaign. Alongside this statement, the government announced it would be giving upwards of £250m worth of grants to 1,300 arts organisations across the UK in the first wave of its support package.

It was also further revealed that the photo of “Fatima” (real name Desire’e Kelley), was a stock image from US photographer Krys Alex based in Atlanta, Georgia which further perpetuated the idea of disingenuous reasons behind this image, a few Twitter uses felt that it was quite insensitive to use an image of a BAME woman. The photographer Krys Alex, has since spoken out in a YouTube video and said “Some people questioned if I knew and if I approved the use of my work. If I’d have known this was going to be used in the way it was, I would have never agreed to it.” Alex has now removed the image, she also stated that “We’re exploring all our options and we’re talking and consulting with different professionals to figure out the best way to protect our rights in this situation.”

In an email to Infosecurity, Javvad Malik, a security awareness advocate at KnowBe4, said the poster did come across as tone-deaf. “With any career, you want to pull people towards it and motivate them to want to choose it,” he said. “It’s only when people enjoy, have an interest in, or have a passion for a role that they actually have a sense of achievement and contentment. “The overall vibe of the poster came across as anyone who spent time in the arts (which is a passion for most) wasted their time and have no career prospects, so should do something like cybersecurity. Just because there is a vacancy in a field, it doesn’t mean you can push anyone into it. If anything, it will only serve as a temporary measure which people will begrudgingly undertake until they can move onto something that offers them fulfillment.”

This advert may pose as a learning experience for all,  as a certain level of prejudice can be felt from this advert and poses the question of whether the government having an improved attitude towards the performing arts and a better relationship with the creative sector would have prevented a such a tone-deaf advert from being released.