BLOG: Using your voice as a woman in cybersecurity 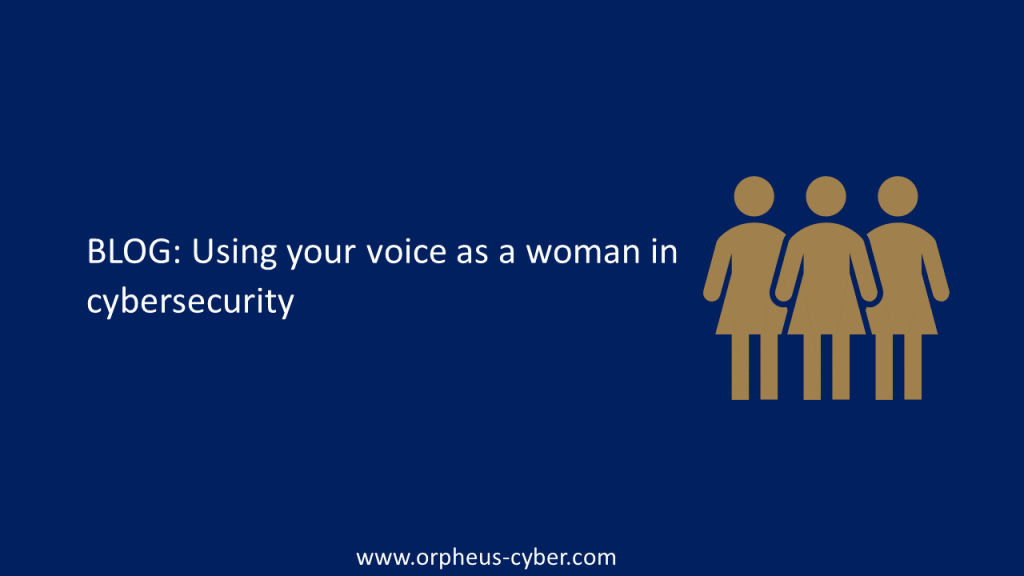 As we have discussed before, diversity within the cybersecurity industry is an aspect that many overlook but should be a focal point of change in the industry. Working as a woman in any industry can be difficult, but today we focus on the cybersecurity industry. There are lots of amazing women in cybersecurity (more on that to come) but we’ve also had a lot of women contact us in the past week who are finding it hard to get into, or get ahead, in cybersecurity. This blog is for those who want to find more ways to be heard. A key way, is to look for employers that already have diverse teams and are going to value your opinion.

As we highlighted in a previous blog, the cybersecurity industry suffers from a large range of diversity issues, gender being one of the issues. The Pipeline’s Women Count 2020 report shows that out of the FTSE top 350 companies, only 14 are led by women, and 15% of these companies have no female executives at all. The NCSC and KPMG UK published a Decrypting Diversity report which stressed that there was “a lack of inclusivity across gender, sexual orientation, social mobility and ethnicity” within the industry, and female representation in UK cybersecurity companies is only 31%. Both reports highlight a necessity for more inclusivity and female representation in both the cyber community and organisations in general. Boosting women’s involvement in information security makes both security and business sense. Female leaders in this area tend to prioritize important areas that males often overlook. This is partly due to their backgrounds. Forty-four percent of women in information security fields have degrees in business and social sciences, compared to 30% of men.

Despite the inequality, many powerful women have made a household name for themselves and have succeeded in what is a primarily male-dominated industry. If there is curiosity, a willingness to learn, and the hunger to understand the technology and how it is used in our world today, then the components needed to succeed within this industry are already there.

While having the personal behaviours and attributes to work in cyber is important, so are qualifications because it shows a willingness to put in the work to learn and improve. For example, a degree in International Studies or International Relations creates an understanding of the global issues affecting society today as well as establishing a better understanding of different nations and cultures. This aids a career in cybersecurity because this knowledge helps apprehend a nation’s, or a cyber attacker’s motives and possibly their behaviours according to differences in culture, ideology, and long-term goals.

Finding a mentor is an important measure in order to create a successful career in cybersecurity. Discovering self-written leadership pieces or looking at research from experienced cyber professionals is a great pathway to learn. Connecting with these individuals on relevant social media such as LinkedIn and articulating an interest in their work by creating conservation and asking questions is a great method of developing that mentor-type relationship. Many mentors look for individuals who are that aware of the direction they would like to take in their career alongside those who are taking proactive steps to start their journey within the cybersecurity field by educating themselves about the industry. This validates a genuine eagerness and want to learn.

Shadowing is also a great way of finding out how females in a company work within the industry and their space. Habitually, many women find it tough, to be frank in meetings or express how they are feeling about a specific subject or action at work, it is important to ask a female mentor how they do it, or simply ask to observe a meeting where women are attending and learn by shadowing a female mentor who demonstrates courage and strength and manages to assert herself in scenarios such as these.

Having a genuine drive and enthusiasm for wanting to get into cybersecurity and taking the steps to begin a career in the industry is straightforward. With more women feeling able to enter a career in the cybersecurity industry, we should expect future diversity reports to show more equal figures and, hopefully, a rise in female leadership roles.