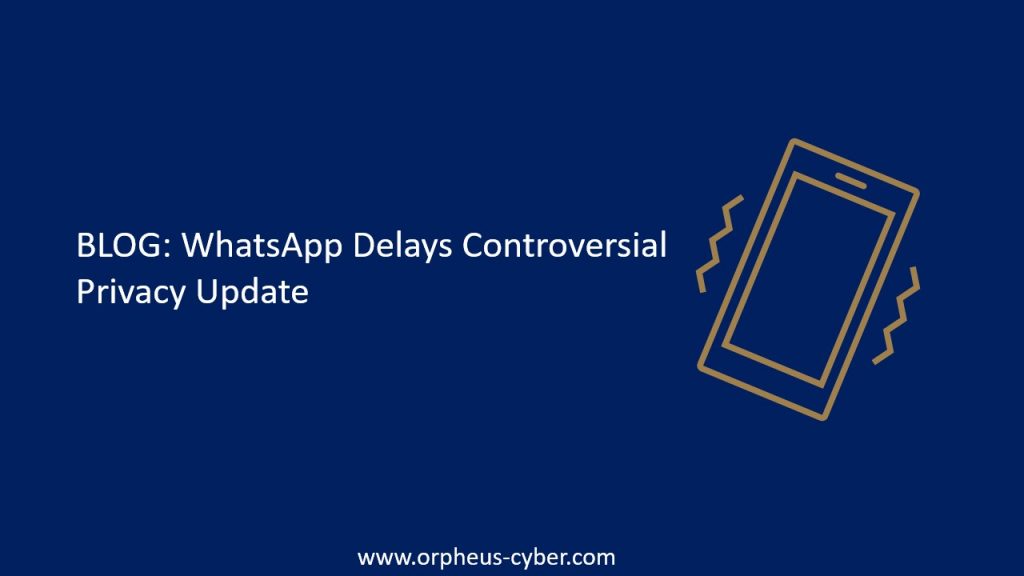 WhatsApp announced on Friday that the controversial policy update (click here for our previous blog) would not be executed until May 15.

The initial update was to take effect on February 8th, but there has been a delay due to the widespread public outrage and theories that have sparked amongst the general public and social media. This is based on the concern regarding the specific kind of information that will be shared under the terms.

At the beginning of the year, WhatsApp began alerting users about a new privacy policy and terms as part of its broader efforts to integrate WhatsApp better with other Facebook products and amidst its plans to transform WhatsApp into a commerce and business services provider.

Under the proposed terms which are about how businesses manage their chats on WhatsApp using Facebook’s hosting settings, WhatsApp would share additional data with Facebook such as phone number, service-related information, IP address, and transaction data for those who use the business chat feature.

The criticism surrounding the update has led to further scrutiny in India, Italy, and Turkey, alongside a large portion of users migrating to messaging competitors such as Signal and Telegram. Since the controversy, Signal has become one of the most downloaded apps on Android and iOS, in part boosted by a tweet from Tesla CEO Elon Musk, who urged his followers to begin using Signal. Telegram also said that it surpassed the 500 million active user mark, gaining over 25 million new users worldwide in 72 hours.

WhatsApp, in a separate FAQ published this week, tried to set the record straight by stressing that it “cannot see your personal messages or hear your calls, and neither can Facebook,” and that it does not share users’ contacts and location information to its parent company.

With the company walking back some of its previous messaging, it remains to be seen if the extra time will help it tide over the controversy and “clear up the misinformation around how privacy and security work on WhatsApp.”

While the change to WhatsApp’s terms and conditions won’t affect those in the UK or Europe specifically, a pop-up notification still appeared on the app for everyone. The public outrage shows the level of cyber awareness we have as a society, no longer is it a laissez-faire attitude to cybersecurity. Customers care about their privacy and there is no longer a significant data breach fatigue.