Orpheus’ proprietary Machine Learning predicts which vulnerabilities not yet being expoloited by hackers will be in the future.

Even with an industry-leading team and budget, it isn’t possible to patch every vulnerability that is discovered. Prioritising those which pose the greatest threat, and have the greatest impact is the best place to start.

Thousands of vulnerabilities, or CVE’s, are ientified and published each year. The problem is knowing which ones to focus on patching or other mitigation which can be a costly and time-consuming process.

Even with the largest budget, organisations need to prioritise their resources as well as consider any down-time caused by patching. It is important to prioritise effectively, reducing risk and making the best use of the organisation’s resources.

Predicting the likelihood of a CVE being exploited in the future is also an important factor. A vulnerability with a severe impact, that is unlikely to be exploited can be prioritised differently to one with a high likelihood of exploitation.

Orpheus has developed the Orpheus Vulnerability Severity Score (OVSS) which uses our cyber threat intelligence, Machine Learning, and other features to give every CVE a score, allowing organisations to filter vulnerabilities on their network by those that are the most serious. Without this approach to risk-based CVE management it is incredibly difficult to know which vulnerabilities to patch first and this enables organisationst to prioritise.

Our OVSS allows you to:

Our use of Machine Learning towards risk-based vulnerability management is award-winning and has been recognised for its innovative approach. 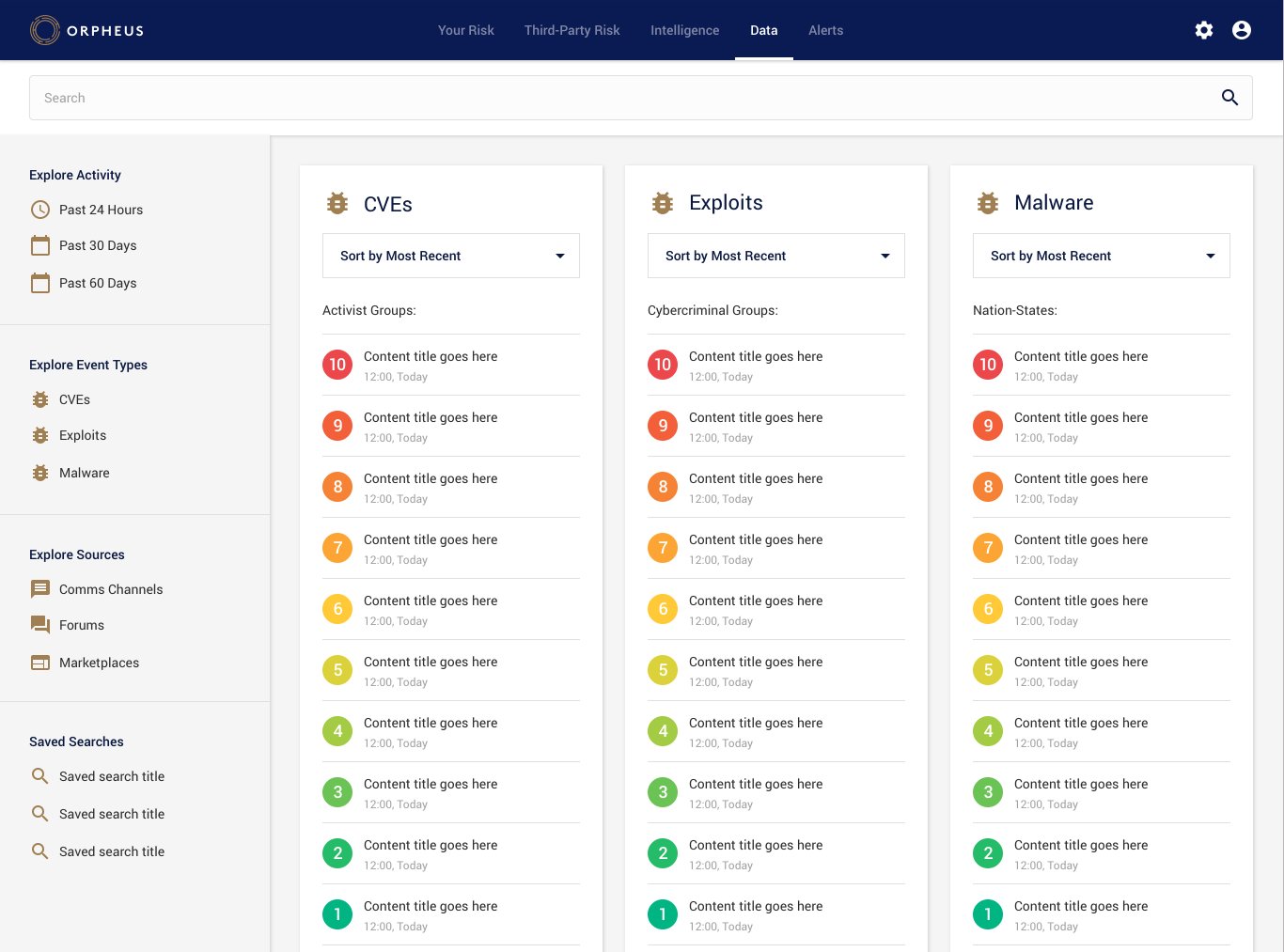 We deploy our UK Government award-winning technologies to collect, index, store and analyse huge volumes of cyber risk data from a wide range of sources, both technical and non-technical.

Orpheus’ advanced analytical techniques, including Machine Learning, combined with our highly-skilled analysts, enable us to provide predictive and actionable intelligence to our clients.

Our Cyber Risk Rating platform shows which vulnerabilities are visible on your attack surface, and that of your third-parties.

Do you want a complete understanding of the cyber risks you face to ensure you have the right defences in place?

Request a trial
"Orpheus’ key staff have a wealth of experience in providing first-rate threat intelligence, and have a good reputation for doing so … I firmly recommend Orpheus."
GLOBAL CYBER SECURITY AND PENETRATION TESTING COMPANY

"I am pleased to provide this reference for Orpheus as an expert provider of cyber threat intelligence."
UK GOVERNMENT DEPARTMENT

"With regard to Orpheus’ work as a provider of cyber threat Intelligence … I am pleased to confirm that Orpheus provided precisely what was required."
GLOBAL CYBER SECURITY COMPANY